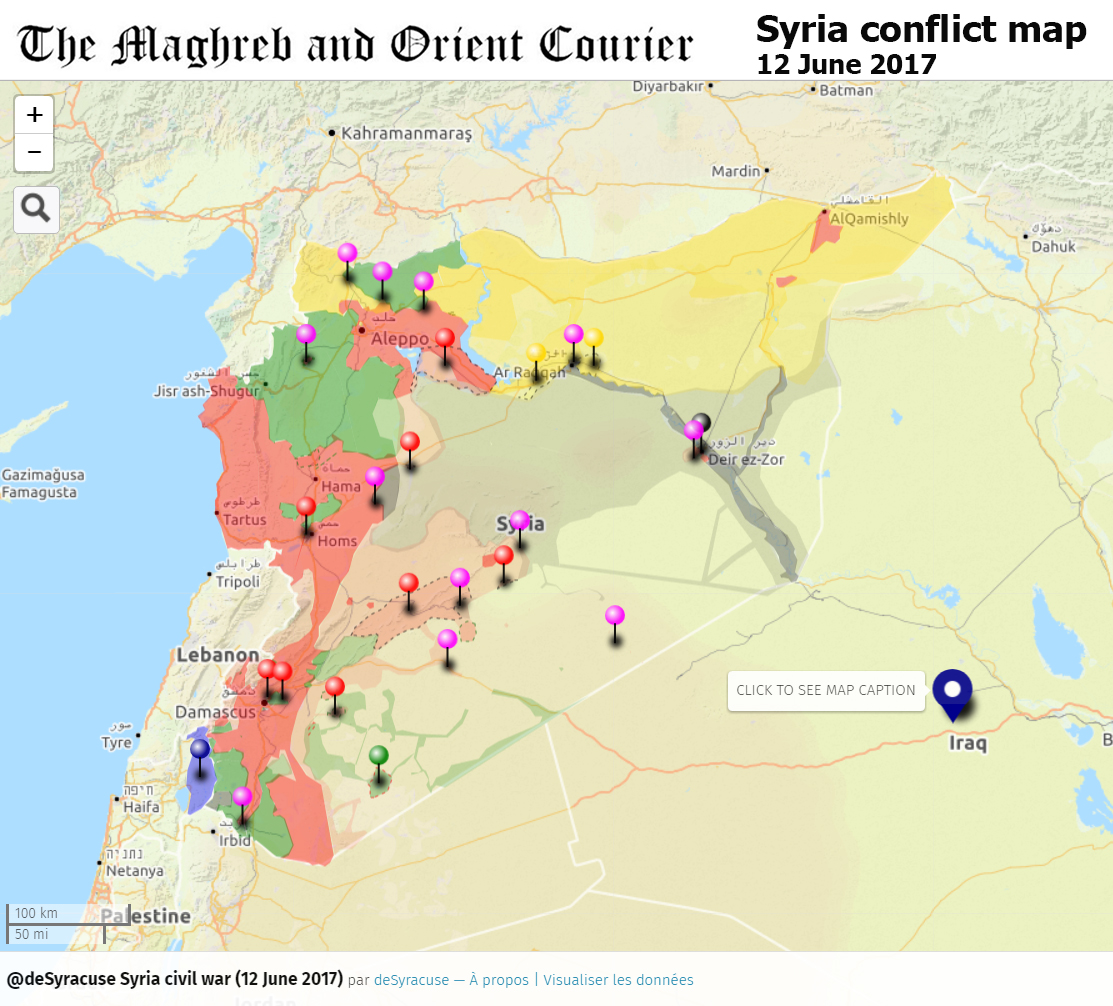 The map presents the main military events since May 15, 2017 (last release of interactive map) to June 12, 2017 . However, some less important events may have not been reported on the map.

If you wish to hide the coloured events dots on the map, please follow instruction :

Summary of the main events :

The Syrian Democratic Forces (SDF) have continued to advance around Raqqah against the Islamic State, besieging the city on 3 sides, and on June 6 they announce the beginning of the battle for Raqqah city.

The Islamic State has lost all its remaining positions in Aleppo governorate, allowing loyalists forces (SAA tiger forces and other military units) to advance along the Southern bank of Euphrates river and reaching SDF positions in Tabqa.

The loyalists have also expulsed the Islamic State from the Qalamoun mountains area, between Damascus and Palmyra, while most of the fighting between both sides is now in Eastern Hama and East of Palmyra.

A tactical war is happening between loyalists and US-backed rebels in South East Damascus desert up to the Jordan and Iraqi border. Some pro-Damascus Iranian-backed units attempted to progress toward An Tanf border post where the rebels and US troops have their base. The offensive was stopped by 2 US airstrikes on loyalists positions. The loyalists however crossed over the Syrian desert East of Tanf and reached the Iraqi border, in an apparent move to block the rebels from moving Eastward to Islamic State’s controlled Euphrates valley.

Evacuation agreements in besieged loyalist or rebel enclaves have continued. Al Waer (Homs) has been evacuated from rebel fighters and their families, as well as Barzeh (Damascus), but in both cases the Syrian government has agreed not to enter the neighborhood before several weeks or months.

In the 4 “de-escalation zones” (Idlib, North Homs, East Ghouta, and South Daraa), almost no fighting was reported, except in Daraa city.