The map presents main military events since August 4, 2017 (last release of interactive map) to September 17, 2017. However, some less important events may have not been reported on the map. 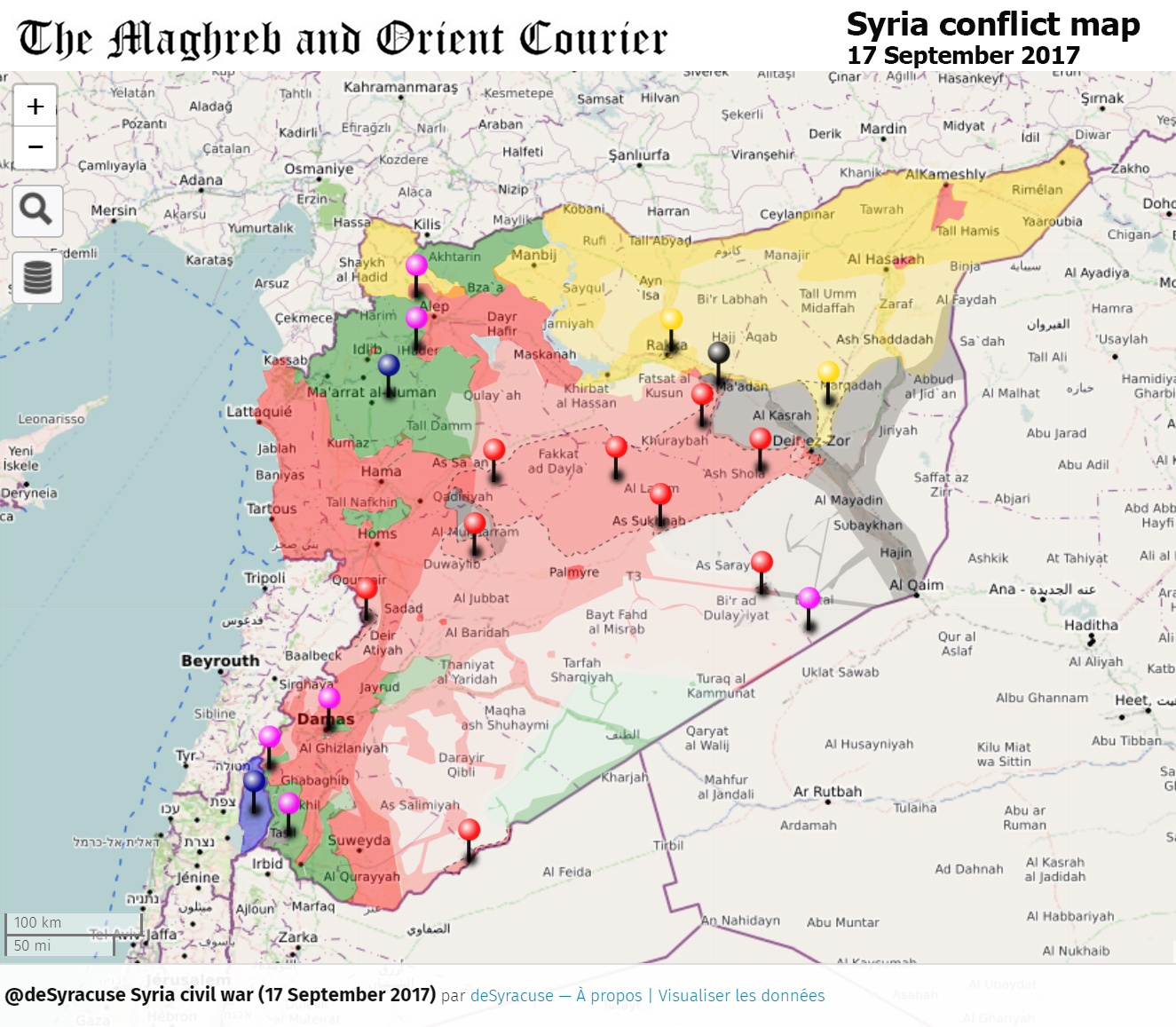 The latest period has seen great achievements for the Syrian Government and its allies. The relative calm on the Western fronts since the installation of the de-escalation zones has allowed Syrian army offensive units to focus on the Islamic State (IS) and to move eastward.

During the month of August, most of the central desert mountains were captured by the Syrian Arab Army (SAA), and on September 5, the 3-years old siege on Deir ez-Zor was finally broken.

The Syrian army could then focus on cleaning remaining IS pockets, the most resistant being the East Hama one where fighting is still continuing. Despite a few counterattacks, IS troops abandoned most of the territories, withdrawing to urban areas where they are able to resist better.

On the Northern bank of the Euphrates river, the battle to expulse IS out of Raqqa is still raging, the Syrian Democratic Forces (SDF, mainly Kurdish) are advancing slowly in the centre of the city where the jihadists are well entrenched. At time of writing, SDF is still in control of more than 50% of the city, although the notion of total security doesn’t exist as IS commandos and hidden cells are able to go almost everywhere in the city.

Reacting to the Syrian army advance on Deir ez-Zor, the SDF moved southward from their positions West of Khabour river. They reached Deir ez-Zor’s outskirts, cutting IS supply lines, but their fast advance increased tensions with the loyalist army, as there is clearly a race to seize IS territory in the province, and more specifically the Oil fields between Deir ez-Zor and Iraq.

In the West, an operation conducted in Lebanon by the Lebanese army and Hezbollah, and in Syria by Hezbollah and Syrian army, achieved expulsion of the remaining IS fighters and other rebels from the Western Qalamoun mountains. Hezbollah and the Syrian army agreed to an evacuation of the IS fighters to Deir ez-Zor province, and the convoy was bombed but not stopped by the US aviation.

In the rebel’s territory, on September 15, Turkey, Iran and Russia finally reached an agreement for setting up the Idlib de-escalation zone.

The agreement reportedly includes dividing the area between 3 security zones monitored by each country. It is however impossible to say, at this time, how the agreement will be implemented, and how Iran and Russia could send their police to areas ruled by Hayat Tahrir as-Sham (HTS, a group dominated by the former Al-Nusra Front).

Most other fronts have been relatively calm, except the area South-East of Suweyda near the Jordanian border, where the Syrian army is continuing to advance against formerly US-backed rebels.