The map presents main military events since September 17, 2017 (last release of interactive map) to December 19, 2017. However, some less important events may have not been reported on the map. 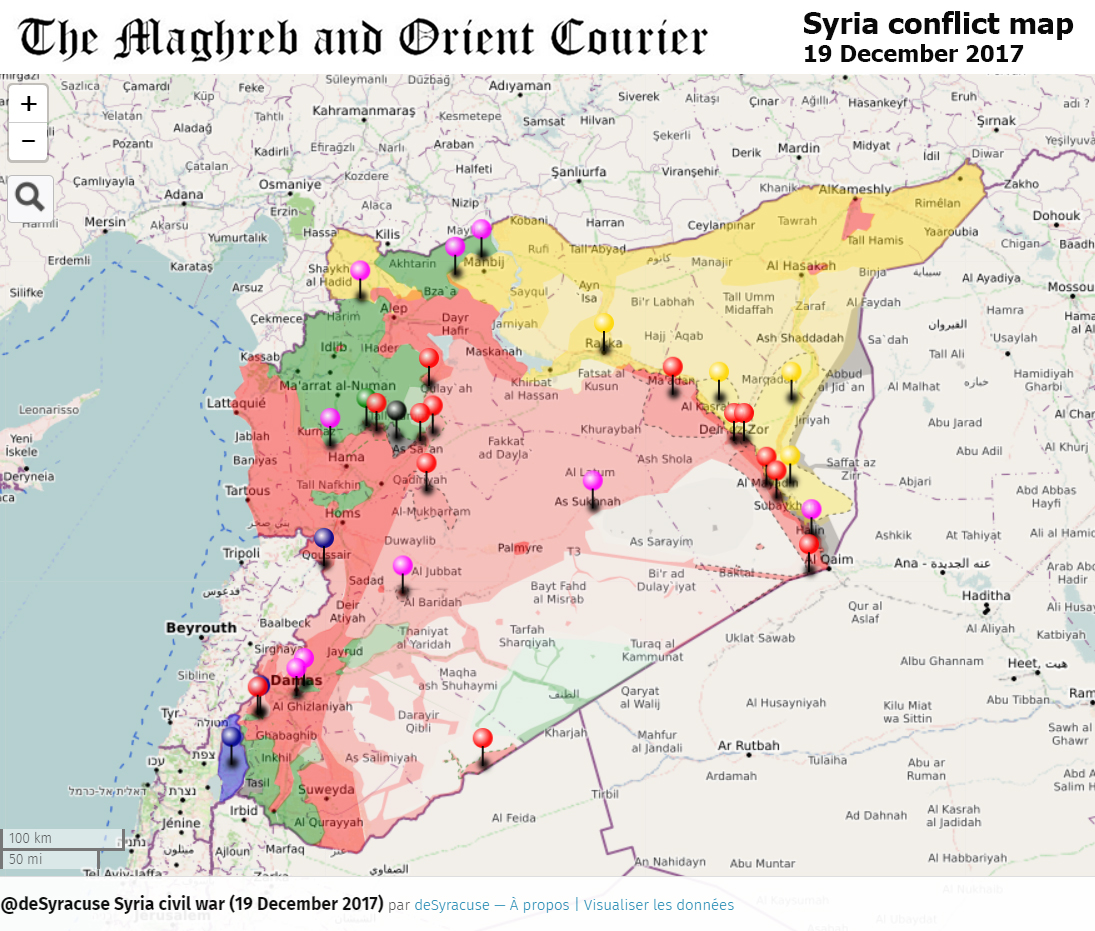 The Loyalist forces (Syrian Arab Army, pro-government militias, foreign militias, Iranian Pasdarans, Hezbollah, Russian air force and other groups) have continued to progress Eastward in the Syrian desert, taking control of large parts of territory formerly controlled by the Islamic State. In November, after a 3-years long siege, Deir Ezzor city was finally liberated on November 22, and most of the Western bank of Euphrates river was in loyalist control by mid-December 2017.

On the Easter side of Euphrates river, the Syrian Democratic Forces (SDF – mainly the Kurdish militias of the YPG), backed by the international coalition, continued to progress South and East, taking control of most of Islamic State positions, except a small number of villages near the Iraqi border. Raqqah city was conquered on October 20, 2017, after a secret deal (revealed by the BBC) was made with Islamic State, allowing hundreds of militants to escape the city toward the group’s remaining controlled territory.

Meanwhile, the tensions rose again in North Hama and South Idlib between the loyalist forces and Hayat Tahrir al-Cham (HTS), a rebel force linked to Al-Qaeda (formerly Jabhat al-Nusra), controlling many areas in Idlib governorate. After HTS launched a successful attack on Abu Dali, a town used as a trading post between loyalist and rebel controlled areas, Government forces launched a wide counter-attack and captured several areas North of the strategic Hama-Aleppo road.

In the same area, hundreds of Islamic State fighters, who managed to escape from formerly-controlled Eastern Hama countryside, were allowed by the loyalist to move Northward, taking control of several villages belonging to HTS. Taking advantage of a tactical opportunity, the Islamic State and the Government forces have been fighting HTS without fighting at each other. As a result, there is a new Islamic State pocket in Northeastern Hama counting about 20 villages.

in Eastern Ghouta (Damascus), the situation is a stalemate despite a rebel offensive in Harasta area with no result, and in Southern Damascus, the Islamic State pocket is still existing, the Jihadists still controlling Hajar Al Aswad as well as parts of the Yarmuk Palestinian camp.

Yet on November 18, in Southern Rif Dimashq, loyalist forces have started a new offensive aiming at expelling the rebels from Beit Jinn, the last area they occupy near the Lebanese border.