Trending
You are at:Home»Arab World Maps»URGENT / SYRIA – Interactive conflict map (on 15 May 2017)
By Emmanuel Pène on May, 2017 Arab World Maps, Breaking News & Debate

Click on the map below for interactive / zoomable version 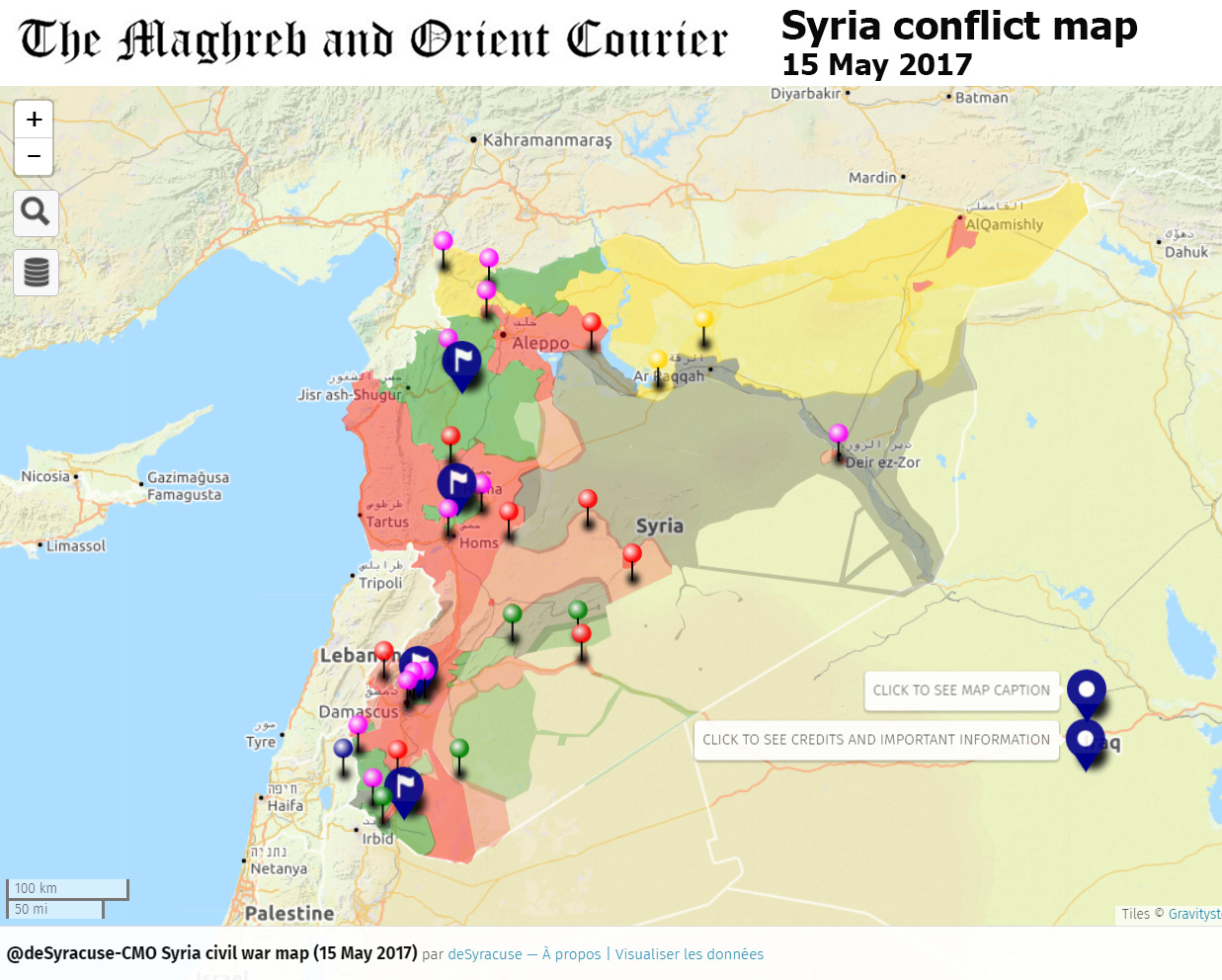 The map presents the main military events from April 10, 2017 (last release of the interactive map) to May 15, 2017 . However, some less important events may not have been reported on the map.

If you wish to hide the coloured events dots on the map, please follow these instructions :

The loyalists have continued to consolidate their strongholds by taking control of more rebel enclaves in Damascus and Daraa in “reconciliation agreements” consisting mostly in evacuation from the enclaves of the remaining rebels and their families toward rebel areas such as Idlib. The loyalists themselves started to evacuate civilians from their only enclave of Fua’h in the Idlib governorate. In Northern Hama, the government counter-offensive ended in the total cancellation of former rebel gains. The rebels only made small progress in Daraa city, while in the Eastern Damascus desert, initial gains by FSA coming from the Jordanian border met a surprise attack from loyalists on the Damascus – Baghdad road, thus cutting all possibilities for the rebels to reach East Qalamoun.

On May 4th, Turkey, Iran and Russia reached a new agreement where several “de-escalation zones” will be created. These safe zones would see a halt to all hostilities, including airstrikes, allowing for humanitarian aid to be delivered and for civilians to safely return. There is also a proposal to deploy third-party monitoring forces. The four de-escalation zones are : Idlib, North Homs, East Ghouta, and South Daraa.

In the Eastern Homs desert, the Syrian government continued to progress slowly against the Islamic State, by consolidating positions around Palmyra, and restoring control on the al Shaer gas fields.

SDF kept advancing toward the Islamic State in Raqqah, took control of the Tabqa dam, and prepared the final encirclement of Raqqah.