Trending
You are at:Home»Books»Books – Iraq in Crisis by Anthony H. CORDESMAN & Sam KHAZAI
By Thibaut Werpin on July, 2014 Books 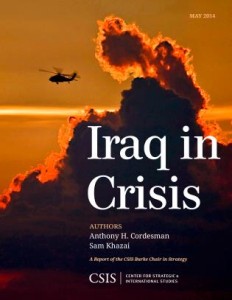 Iraq is a nation in crisis bordering on civil war.

The recent Iraqi election offers little promise that it can correct the corruption, the weaknesses in its security forces, and the critical failures in governance, economic development, and leadership.

The problems Iraq faces in 2014 are a legacy of mistakes made during and after the U.S.-led invasion in 2003, but increasingly the nation is dealing with the self-inflicted wounds of its leaders who abuse human rights, repress opposing factions, and misuse the Iraqi police and security forces to their own end.