Trending
You are at:Home»Books»Books – Once Upon A Revolution : An Egyptian Story by Thanassis CAMBANIS
By Lorenzo Lanciers on December, 2015 Books 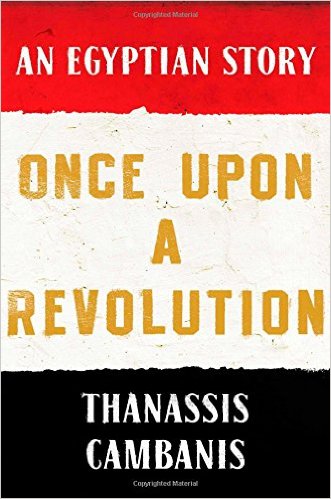 The story brings to life the noble dreamers who brought Egypt to the brink of freedom, and the dark powerful forces that -for the time being- stopped them short.

But Thanassis Cambanis also tells a universal story of inspirational people willing to transform themselves in order to transform their society. He focuses on two pivotal leaders: one is Basem, an apolitical middle-class architect who puts his entire family in danger when he seizes the chance to improve his country; the other is Moaz, a contrarian Muslim Brother who defies his own organization to join the opposition.

These revolutionaries had little more than their idealism with which to battle the secret police, the old oligarchs, and a power-hungry military determined to keep control.

Basem wanted to change the system from within and became one of the only revolutionaries to win a seat in parliament. Moaz took a different course, convinced that only street pressure from youth movements could dismantle the old order.

Their courageous and imperfect decisions produced an uprising with one enduring outcome: no Arab leader ever again can take the population’s consent for granted.