Trending
You are at:Home»Books»Books – Out of Nowhere – The Kurds of Syria in Peace and War by Michael M. Gunter
By Lorenzo Lanciers on May, 2014 Books 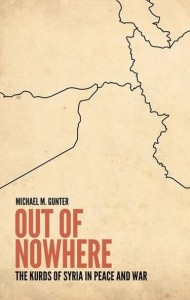 As Syria’s Kurds become more deeply embroiled in a war not of their making, this book is an essential point of reference.

In mid 2012 the previously almost forgotten Syrian Kurds suddenly emerged as a potential game-changer in the country’s civil war when in an attempt to consolidate its increasingly desperate position the Assad government abruptly withdrew its troops from the major Kurdish areas in Syria. The Kurds in Syria had suddenly won autonomy, a situation that has huge implications for neighboring Turkey and the near independent Kurdistan Regional Government (KRG) in Iraq. Indeed, their precipitous rise may prove a tipping-point that alters the boundaries imposed on the Middle East by the Sykes-Picot Agreement of 1916.

These important events and what they portend for the future are scrutinised by the renowned scholar of the Kurds Michael Gunter. He also analyses the sudden rise of Salih Muslim and his Democratic Union Party (PYD) -which was created by the Kurdistan Workers’ Party (PKK) and remains affiliated to it- and the extremely complex and deadly fighting between factions of the Syrian Opposition affiliated with al-Qaeda such as the Jabhat al-Nusra jihadists and the PYD, among others.