Trending
You are at:Home»Books»Books – Qatar – A Modern History by Allen Fromherz
By Thibaut Werpin on June, 2014 Books 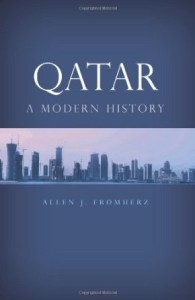 What role does Qatar play in the Middle East and how does it differ from the other Gulf states ? How has the Al-Thani tribe shaped the history of modern Qatar ? And how is a traditional tribal society adapting to its status as a burgeoning economic superpower ?

Qatar plays a crucial part in the Middle East today. With the second greatest natural gas resources in the region, Qatar’s economic clout is considerable.

At the same time the Qatar story is replete with paradoxes : the State hosts the Al-Jazeera media network, an influential expression of Arab nationalism and anti-Americanism, while also hosting the principal US naval base in the region.

Its leaders, like Saudi Arabia’s, adhere to the Wahhabi form of Sunni Islam, yet Qatar eyes its Saudi neighbours with suspicion. It is a fervent champion of the Palestinian cause, yet welcomes the Israeli Foreign Minister to present the Jewish state’s case in its capital, Doha.

With this groundbreaking modern history, Allen Fromherz presents a full portrait which analyses these paradoxes and Qatar’s growing regional influence within a broader historical context.

Drawing on original sources in Arabic, English and French, as well as his own fieldwork in the Middle East, Fromherz offers a multi-faceted picture of the political, cultural, religious, social and economic make-up of modern Qatar, its significance within the GCC states and the wider region.