Trending
You are at:Home»Books»BOOKS – The ISIS Caliphate: From Syria to the Doorsteps of India by Stanly JOHNY
By Redaction on June, 2018 Books 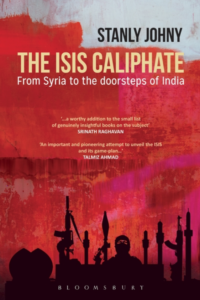 The rapid rise of the Islamic State in Iraq and Greater Syria was almost like a fairy tale.

A group that was unheard of in early 2013 captured territories as big as Great Britain by 2014 June, effectively erasing the border between Iraq and Syria.

It announced a Caliphate, drew in thousands of fighters and supporters from across the world, including India, launched attacks in nations from Brussels to Bangladesh and earned loyalties of local militant groups in conflict-ridden states such as Nigeria, Libya, Afghanistan and Pakistan. By the end of 2014, ISIS had transformed itself into a global force of terror.

ISIS Caliphate tells the story of this phenomenon. Based on primary sources and interviews, the book explores the geopolitical, organisational and ideological roots of ISIS and narrates how the group has spread its wings from its core in Iraq and Syria to the peripheries of India and Pakistan.