Trending
You are at:Home»Books»Books – The Last Refuge – Yemen, Al-Qaeda, and America’s war in Arabia by Gregory D. JOHNSEN
By Thibaut Werpin on July, 2014 Books 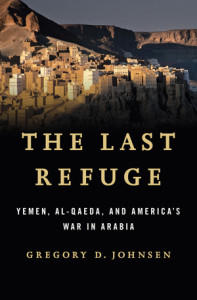 A gripping account of how al-Qaeda in Yemen rebounded from an initial defeat to once again threaten the United States of America.

Far from the battlefields of Iraq and Afghanistan, the United States and al-Qaeda are fighting a clandestine war of drones and suicide bombers in an unforgiving corner of Arabia.

The Last Refuge charts the rise, fall, and resurrection of al-Qaeda in Yemen over the last thirty years, detailing how a group that the United States once defeated has now become one of the world’s most dangerous threats.

An expert on Yemen who has spent years on the ground there, Gregory D. Johnsen uses al-Qaeda’s Arabic battle notes to reconstruct their world as they take aim at the United States and its allies. He brings readers in-side al-Qaeda’s training camps and safe houses as the terrorists plot poison attacks and debate how to bring down an airliner on Christmas Day.

The Last Refuge is an eye-opening look at the successes and failures of fighting a new type of war in one of the most turbulent countries in the world.