Trending
You are at:Home»Books»Books – Toppling Qaddafi: Libya and The Limits of Liberal Intervention by Christopher S. CHIVVIS
By Lorenzo Lanciers on September, 2014 Books 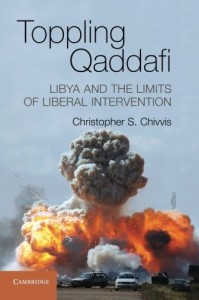 Toppling Qaddafi is a carefully researched, highly readable look at the role of the United States and NATO in Libya’s war of liberation and its lessons for future military interventions.

Based on extensive interviews within the US government, this book recounts the story of how the United States and its European allies went to war against Muammar Qaddafi in 2011, why they won the war, and what the implications for NATO, Europe, and Libya will be.

This was a war that few saw coming, and many worried would go badly awry, but in the end the Qaddafi regime fell and a new era in Libya’s history dawned.

Whether this is the kind of intervention that can be repeated, however, remains an open question – as does Libya’s future and that of its neighbours.