Returning to the “Arab Spring” and one year of The Maghreb and Orient Courier. 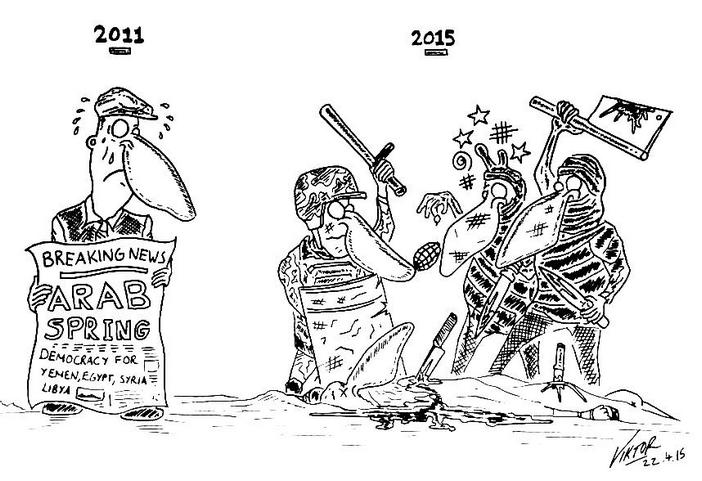 More than four years ago, an imaginary phenomenon appeared in the international “mainstream” medias (especially in the West…) and it was barely questioned: the “Arab spring”.

Just about one year ago, a new review appeared, specialised in Arab affairs, whose analyses have been of perfect rigour and impeccable professionalism, often running against the current of common opinions published in the “mass media”, but proved right time and time again by the events: The Maghreb and Orient Courier.

“In Egypt, the return to the old regime is impossible”, preached Alain Gresh in 2012 and still at the beginning of 2013. “The Egyptian people went out onto the streets and made Mubarak fall after an impressive mobilisation – they are not ready to go home. The permanent mobilisation and the determination of this population make the return of the old regime impossible. These people will not let their victory be confiscated”, guaranteed the deputy director of Le Monde Diplomatique at the time. “Changing everything so as to change nothing”… “Facing the Islamists, the army could prove essential”… worried other analysts, less appreciated.

“It is the wind of freedom that blows through Libya”, proclaimed British and French press writers! “After forty-two years of dictatorship, the country will finally discover democracy and real economic prosperity”, as a promoter of the Libyan revolution chanted, a certain French writer, ‘BHL’, secretly jealous en hateful, but never opposed by his equals… “Chaos, never ending clan conflicts and galloping Islamism”, were predicted by few rare discording voices, accused of “defending the dictatorship”, of “supporting Gadhafi”, and they were immediately ostracised and reduced to media silence.

The head of the international section of the famous and “very serious” newspaper Le Monde, Christophe Ayad (who himself admitted never to have been in Syria), announced in 2011 the end of the regime in Damascus and that the “pacific revolution” would live its “sunset” in few months time. “Syrian society is very divided; the communitarian, religious and ethnic patchwork, which separates Syria promises more surprises… President al-Assad still has some years ahead”, wrote a certain “Tintin”, more often visiting the “country of Bashar”… and, as a consequence, brutally dis(qualified) as “idiot” in the columns of Le Monde and as “pro-Assad” by other writers of the profession … without possible appeal.

“In Tunisia, democracy is going well”, titled recently the Courrier international. When the constitution presents numerous shadow areas, eminently destroying freedom, after three years of impossible entente of Ennahdha and the centre-left … When the only two social-democrat parties crumbled in the legislative elections of 2014, without any real decrease in support for the Islamists, when on the other hand some supporters of the politico-economic mafia rose to power again. To begin with the new leader, now President of the Republic, former head of state security under Bourguiba, then notorious apparatchik of the ‘benalist’ machinery – a reality and a past that no mainstream media even mentioned… Because “democracy is going well in Tunisia”. A veiled reality; denounced since two years only by those who know the ropes of the daily political terrain of Tunisia and have apprehended his “subtleties”.

Is it necessary to even recall the euphoric titles, which saluted the “successful democratic transition in Yemen” and the “first free presidential elections in Sanaa”? Elections with a single candidate… Were the authors bling or brainless…? A parody of “democracy”, of which the Westerners were the victims, it seems; but certainly not the Yemenis themselves, had remarked some observers now forgotten.

Confronted with this obscenity, Stéphane Hessel would have cried “Outrage!”. But outrage is not enough, because too often it remains a dead letter… A reaction was needed to face the incompetence and to counter-attack nonsense, sufficiency… and arrogance…

Hence it is to those less appreciated analysts, to those ostracised voices, to those idiots, those forgotten observers, to those impeccable professionals, to those and others, that The Maghreb and Orient Courier addressed recognition and value, and the means to promote expertise, by calling them to form an unparalleled team, a pool of intellectuals, capable of sharing with the readers the keys to the Arab world and to comprehensively explain the ropes.

What are you muttering? I can barely hear you…“A vindictive editorial”? “Resentment”? “A settling of scores”?… “Certainly, you were right… But no indecent triumphalism in view of the horrible state of affairs.”

Are those the reproaches I need to anticipate?

Why not remember how powerful “mainstream” media work, all subscribed to the big press agencies, which dictate the “state of affairs”?

Why not remember how the dominant press bodies, financed by stakeholders that have made them dependent, feed off each other, “inventing” reality and locking their readers into a virtual world?

Why not simply insist on the difficulty, the near-to-impossibility of being heard when the analysis or the discourse opposes this “media truth” uniformly accepted?

The rule of the press is simple: always say what every one else says, so as to never be blamed for making mistakes… Of course, “one does not abuse an ocean”… But that is what we do not accept.

The world of information is very ill; in a current global and international geopolitical context, the knowledge about the Arab world as it is, constitutes a necessary priority.

With one year of existence, The Maghreb and Orient Courier has imposed itself as a reference in academic, diplomatic circles and even… journalistic; and its readership is becoming larger with every month – curious to understand what happens in the vast “Orient”, so close but so complex.

All the best to the entire team!