Trending
You are at:Home»Kurdistan»KURDISTAN – Interview (2/3) – Ibrahim Biro: “Turkey is the big neighbour of the Syrian Kurdistan and we need a good relationship with Erdogan”
By Pierre Piccinin da Prata on June, 2017 Kurdistan

Rarely taken into account in the analyses made about the future of the Syrian Kurdistan (Rojava), an opposition exists to the dominant Kurdish current represented by the PYD-YPG (Syrian political arm of the PKK).

The Maghreb and Orient Courier met Ibrahim Biro in a hotel in Erbil.

He is the head of the Kurdish National Council in Syria (KNCS), exiled in the Iraqi Kurdistan.

The first part of this interview was published

in The Maghreb and Orient Courier’s May 2017 issue 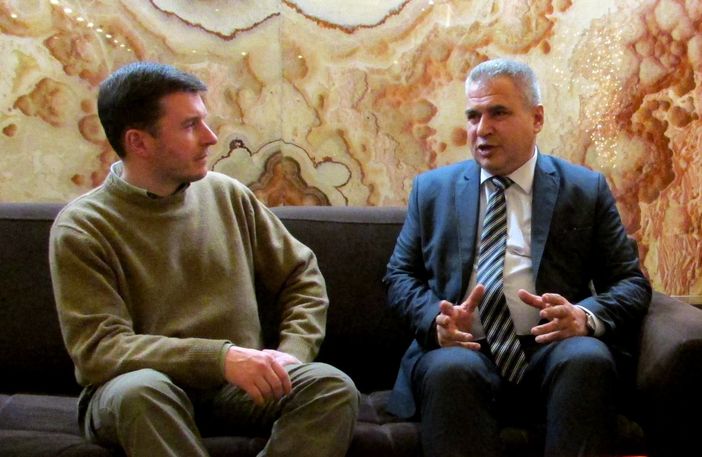 Pierre Piccinin da Prata (MOC) – The Patriotic Union of Kurdistan (PUK), one of the two main parties in Iraqi Kurdistan, refuses contact with the Kurdish National Council in Syria because they are supporting the PKK and its Syrian branch, PYD-YPG. Contrariwise the Kurdistan Democratic Party (KDP), leaded by Massoud Barzani is supported by Turkey against the PKK… What are your relations with KDP, the other big Kurdish party in Iraq?

Ibrahim Biro – We have a good relationship, and we know they help us a lot. Of course, we have a relationship through the Kurdish regional Government (KRG) in Iraq and through President Barzani. We sense that we get more support from KDP. We aren’t deliberately approaching the KDP, but we get more support from them. Of course, our liaison is through the President’s office.

PPdP – Can we speak a little bit more about Turkey?

Ibrahim Biro – Turkey? Of course! It is a big neighbour. Our border is completely connected to Turkey. Our land-connection with Turkey is something that doesn’t even exist in Iraqi Kurdistan.

This is why we say that we cannot oppose Turkey. If we would, it would be bad for the Kurds of Syria.

The PYD and the PKK have tried to show that all the problems in Syria are because of Turkey and not because of Bashar al-Assad. This is what the PYD constantly projects to the locals in Rojava.

PPdP – Recently, because of the revolution, Bashar al-Assad gave passports to the Kurds.

Ibrahim Biro – How many?

Ibrahim Biro – They didn’t “gave” it. They just gave something back. They took it from us some years ago and gave it back now.

The reason why Bashar al-Assad made this gesture, was to make sure that the Kurdish side would be with him, against the Syrian people.

We want a democratic and secular Syria, which defends the rights of every community in Syria. And we’re not talking about one individual which is Bashar al-Assad. We’re talking about the system.

The first article stipulates that Syria is an Arabic Islamic State. We will never accept this. We want for the future constitution of Syria to identify the Kurds as a nation inhabiting its own areas in Syrian Kurdistan. We as the Kurdish National Council in Syria have never called for the break-up of Syria. We consider ourselves as part of this country, but believe that a federal region would protect our rights.

When we talk about federalism, we are not just talking about ourselves and only the Kurds. We believe that after the Syrian revolution and after the infighting between Sunnis and Shiites, one Syria with centralized power cannot exist anymore. We as a Kurdish nation believe that other groups, like the Christians and Yezidis have a similar belief; that they cannot live again in a centralised Syria.

PPdP – I understand that, but the PUK and the PKK accuse PDK and its allies to be just puppets in the hands of Turkey. They also say that President Barzani works without an ideology and just for himself, his family and his clan. They say he’s ready to sell the Kurdish identity to Erdogan because of his own interests. What do you answer?

Ibrahim Biro – I believe that for the Iraqi Kurdistan region, and every other Kurdish part of the other four countries, President Barzani represents the national project of the Kurdish people.

As for the accusations that we are a puppet of Turkey… As I’ve said earlier, I don’t think it is in our interest to fight and oppose Turkey. If it wasn’t because of PYD’s policies, Rojava would have had many border crossings with Turkey and Iraqi Kurdistan. The whole world had accepted that the headquarters for the Syrian opposition would be in Istanbul in Turkey. We have a representative in the opposition. If the opposition decides to move the office to Cairo, Jeddah or anywhere else, then we would move there. We would send our representative there.  If it was in Europe, you know, better! You know, we are ready. But the countries have already decided it will be based in Istanbul.

PPdP – You’ve seen what happened in Turkey. Seven Kurdish cities are about 80% destroyed. Kurdish people displaced by Turkey. There is a project by the government to replace them with Arab refugees. I mean: Erdogan has now decided to destroy the Kurdish opposition in Turkey. We had a correspondent in the Turkish city of Nusaybin near the Syrian border. He said that seven cities were quite completely destroyed! Our correspondent told us that it is like a civil war! What do you expect from that AKP government?

Ibrahim Biro – There is something we have to be very honest about. The Turkish government has to solve the Kurdish question in Turkey. We haven’t defended the Turkish actions in those areas or against the Kurdish people. We say that we are Kurds from Syria. It’s not in our position to interfere in Turkish domestic affairs.

PPdP – But they are your brothers!

Ibrahim Biro – Turkish opposition towards the Kurds in Turkey is not because of the Kurds in Syria. We believe that the PKK has become paralysed in Turkey. After 30 years of armed revolt against the successive Turkish governments it has not been able to liberate anything.

After winning 80 members in the Parliamentarian elections, and 130 mayors in Kurdish areas, they were not able to benefit from this newfound power. When Erdogan needed them to create a coalition government, they were digging trenches inside Kurdish cities.

PPdP – What do you mean “When Erdogan…”?

Ibrahim Biro – In the first election, HDP [Democratic Party of the Peoples, a pro-minority party representing mainly the Kurds in Turkey] won 80 members in Parliament. Erdogan invited them to join the government, to create a coalition. When they could have created a coalition government with Erdogan, PKK was building trenches in Kurdish cities. When they could have negotiated with Erdogan over constitutional articles, they instead returned to armed revolts.

PPdP – I think this is not exactly what happened; it was Erdogan himself who decided to cut negotiations. At a moment (before the coup), Erdogan felt strong enough to use force against the Kurds. He decided unilaterally to stop the negotiations about a sort of federalism, because he is a nationalist.

Ibrahim Biro – This is not what I remember. I remember in the first round of the elections, that he could not make the changes to the constitution that he wanted to make. He needed a partner. He needed HDP to join him to form a majority for the government and for the constitutional changes. PKK didn’t give HDP the opportunity to engage in these political discussions.

Our position is that if the PKK has not been able to achieve anything in 30 years through fighting, then politics should be tried instead. This is needed to have seats in the Parliament. But now, because of the PKK behaviour, if there was another election in Turkey, another round, HDP would not be able to cross the 10% threshold.

Ibrahim Biro – We are not defending Turkish actions, but I have met the Turkish foreign minister, Ahmet Davutoglu and, before him, Mevlüt Cavusoglu. In our meetings, they have never said anything against the Kurds, but their policy was very much against the PKK.

Especially given that PKK themselves, have said that they’re not pursuing the Kurdish project.