After Libya and Yemen, Mali is becoming a new Somalia…

Since 2013 and the French Serval operation against the jihadist movements controlling self-declared Azawad, one could believe that the situation has improved in Northern Mali. However, the heavy presence of UN troops (MINUSMA), as well as of the French Barkhane special operation troops, has not prevented the deterioration of the security situation over the past months, particularly in the centre of the country, leaving more than half of the country in a dangerous and lawless state. 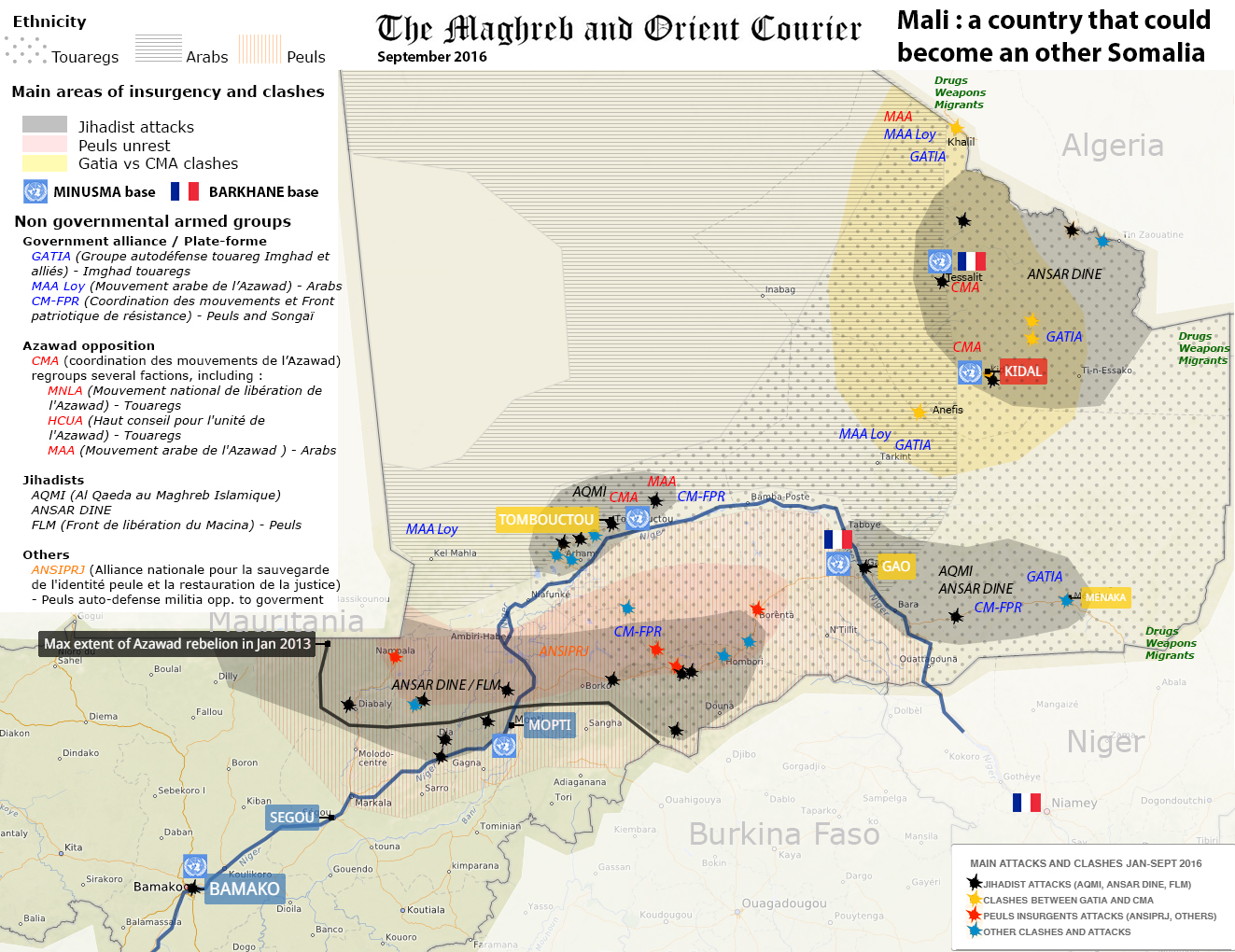 The Malian governmental forces control the road from Bamako to Mopti and Sevare. However, further to the North and to the East, the government employees have left the towns, the rare FAMAs (Mali Armed Forces) do not venture out of their bunkered bases, and the government-appointed governors stay in Bamako.

Peuls mostly inhabit the area East and North of Mopti, even if Songai and Touaregs are also present, as well as Bambaras between Mopti and Sevaré. In 2016, the area has experienced serious violence between Peul breeders and Bambara farmers, and the Bamako authorities have been accused of supporting the Bambara militias. In addition, arbitrary arrests and violence were reportedly committed by the police or by the army on the Peuls in several areas. Government supporters have accused the Peuls of being supporting jihadist. This situation has led to a great discontent in the Peul community, and to the creation of several armed groups, one being the FLM (Front de Libération du Macina), jihadist and supposed to be a branch of Ansar Dine, and another being the ANSIPRJ, namely defending the identity of the Peuls against the government exactions, but not jihadist. Both groups have claimed the Nampala attack in July 2016, where 17 government soldiers were killed, as well as several attacks in the area.

In Timbuktu, the whole area is under the threat of AQMI (Al Qaeda in Islamic Maghreb), a jihadist organization that was joined last year by Mokhtar Belmokhtar and what remained of MUJAO (and lately Al-Mourabitoune). However, the situation in Timbuktu itself is quite calm. A mix of Songai, Bellas (former Touareg slaves), Arabs, and Kel-Ansar tribe Touaregs inhabit the town. The local HCUA groups (part of the main Azawad opposition group CMA and the HCUA based in Kidal) has adopted a more moderate stance towards the Malian government, and is collaborating with the MINUSMA mission.

Gao is the most important town of Eastern Mali. Inhabited by Peuls, Songai, Touaregs and Arabs, it is also the main base for the French Barkhane operation in Mali, and has one of the main MINUSMA bases.

In spite of this, the security situation in the Gao area is more problematic. The area has experienced high level jihadist activity, mostly from Ansar Dine and AQMI, and is also the setting of the struggle of several pro-loyalist militias, such as the CM-FPR, regrouping mostly Songai and Peuls, and the GATIA (Groupe autodéfense touareg Imghad et alliés), unofficially ruled by a Touareg general from the Mali Armed Forces, General El Hadj Ag-Gamou. Despite being theoretically a member of the governmental “plateforme”, those groups and militias mostly work on their own agenda, and due to the lack of governmental administration, experience a high level of autonomy.

The GATIA is opposing the CMA for the leadership of the whole Touareg area North of Gao, up to Kidal and the Algerian conflict. The reasons are numerous, such as the control of the trading posts and of the numerous smuggling activities (weapons, migrants, drugs…), but the main reason seems to be the long term rivalry between the Ifhogas and Imghad touareg tribes, the GATIA being the defender of the Imghad against the Ifoghas-dominated MNLA and CMA.

After the Serval operation, the Kidal area has been taken over by the MNLA with the blessing of the French authorities, and the Imghad are complaining about the fact that they are excluded from the Kidal administration. The whole area from Bourem to the Algerian border has been the witness of widespread clashes between Gatia and CMA troops, and after an unsuccessful attempt of taking power in Kidal during the summer of 2016, Gatia took several CMA positions around the town in an apparent strategy of encirclement. The whole area North of Kidal is also a stronghold for Ansar Dine (jihadist), which is attacking both CMA and pro-governmental allies as well as French and MINUSMA troops. Finally, but importantly, West of Kidal, the Arabs of the MAA (Mouvement arabe de l’Azawad) have split between an opposition branch part of the CMA, and a loyalist branch allied to GATIA.

The weakness of the Malian government, the ethnic rivalries and the struggle for power and resources have favoured the development of many local powers and militias in the North.

The jihadist groups are more present than ever, developing in Mali as well as in neighbouring countries.

The presence of MINUSMA and of the French special operation troops has not allowed a return of the Malian State and of public security in Gao, Timbuktu and Kidal.

More important, the situation has largely deteriorated in central Mali, amid Peul unrests against government exactions.

Without restoring the presence of public administration and legal security forces, the situation will continue to worsen and the country may evolve in the same way as Somalia.