Since the implementation of the US and Russian brokered ceasefire agreement, all the eyes are on Aleppo. The city has been the most disputed territory in the whole of Syria, concentrating the most fierce and destructive fightingin a small, but populated territory, leading thousands of refugees to leave that once prosperous region. The map is displaying the positions on February 29, 2016. 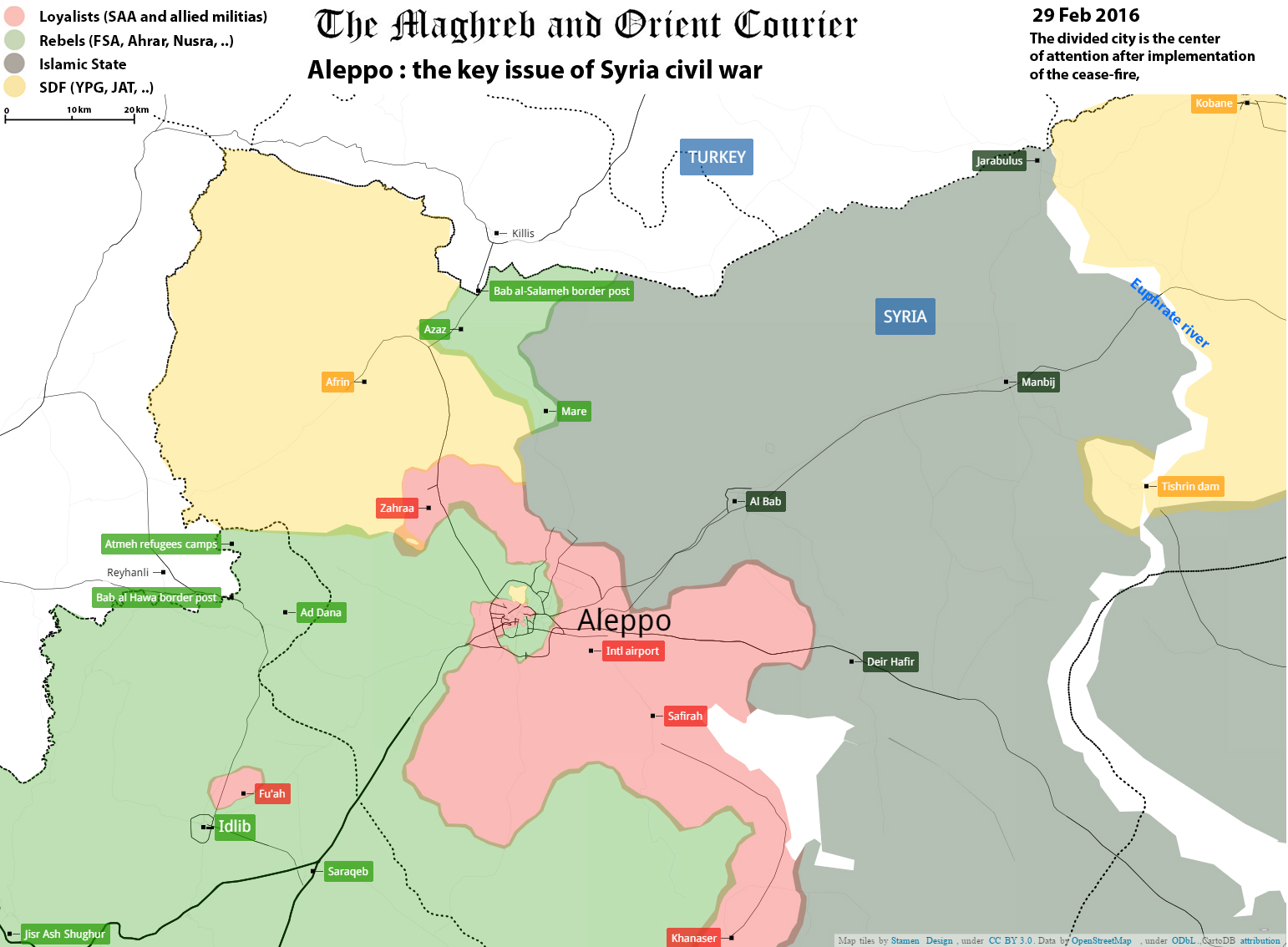 The recent weeks have seen many changes in the territorial control. In Southern Aleppo, the loyalists aided by Russian airstrikes, have gained important territory in the Hader area and up to the M5 highway, reducing the pressure that the rebels had managed to put on Aleppo’s Southern access.

In the intervening time, in the Southeast of Aleppo, and East of Safirah, the loyalists have lifted the 2 years-long siege of the Kweires airbase, and managed to clear 40 km of the strategic Aleppo – Deir Hafir road. This achievement allows them to ease the Islamic State’s pressure on the city of Safirah, as well as being in a favorable position in order to further progress towards the Raqqah governorate.

Beginning of February 2016, in the North, the loyalists launched a new offensive aimed at lifting the rebel sieges of Zahraa and Nubl. Both towns were inhabited by Shia and defended by local militias helped by Hezbollah units. Meanwhile, the Syrian Democratic Forces (SDF), backed by the US and helped by Russian airstrikes attacked the rebels just north of the loyalist offensive, quickly managing to conquer important towns and villages such as the Menagh airbase and Tall Rifaat. As a result, the rebels’ corridor Northof Aleppo was cut from South-Western Aleppo, the only remaining supply road to Azaz and Mare going North through the Bab al-Salameh border crossing.

Important waves of refugees have fled the fighting, some trying to gain access to Turkey’s Killis refugees camps, and the others going back to the Idlib territory after an agreement was made with the YPG in order to let them go through the Afrin area.

If the International-brokered ceasefire is holding in the coming weeks, there will be probably a change in the frontline priorities: if the ceasefire is respected, the North Aleppo and Aleppo city fronts should be quieter, except for the Eastern frontline with the Islamic State.

Meanwhile, there may be continuous operations in the Western countryside, as there is a strong presence of Jabhat al-Nusra there (a faction that is not part of the ceasefire).

The loyalists may also focus on gaining more ground over the Islamic State, in order to avoid Aleppo’s only supply road to be cut again near Khanasser, and the Kurds and the SDF should continue their progress from the Tishrin dam area toward Manbij.