The map presents main military events since June 12, 2017 (last release of interactive map) to August 4, 2017. However, some less important events may have not been reported on the map. 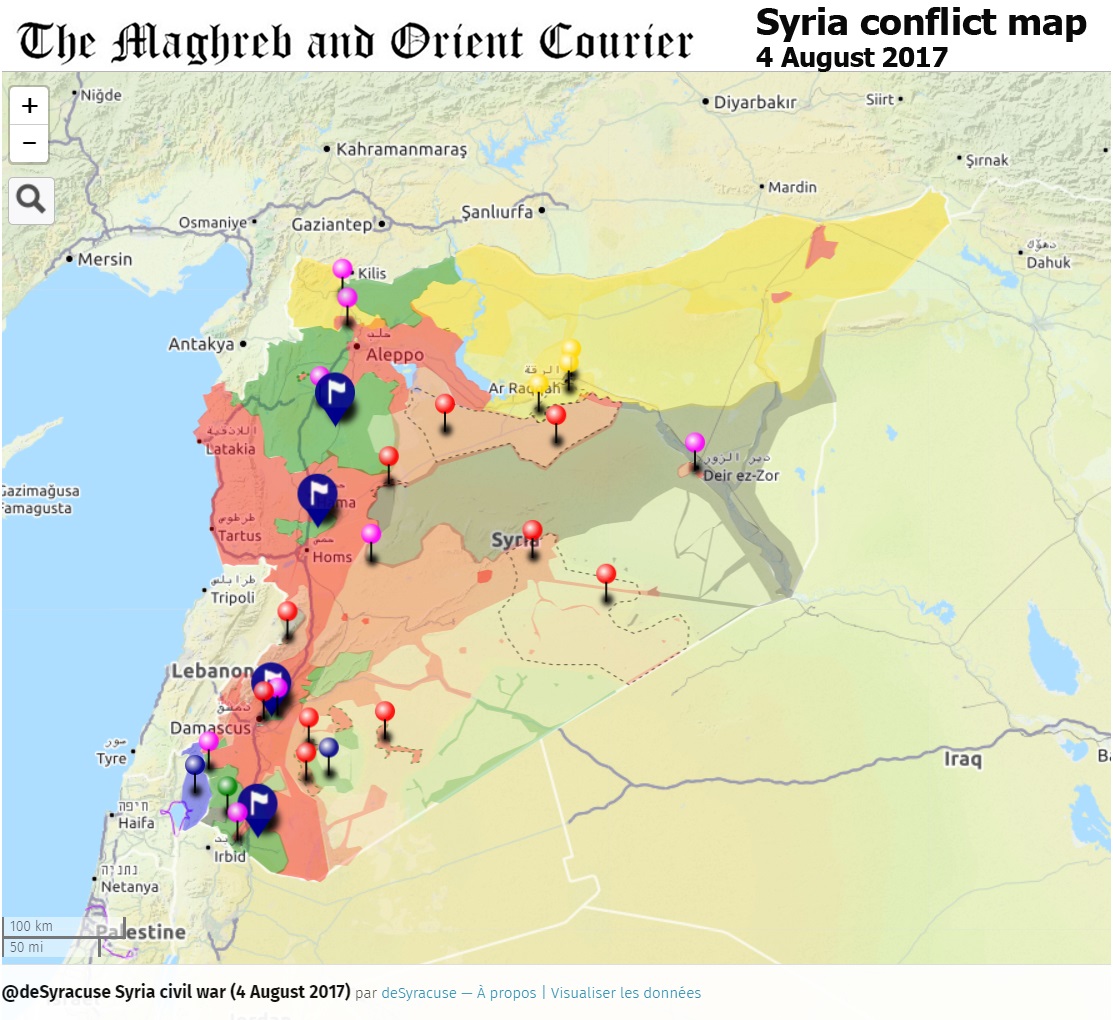 The battle of Raqqah has been raging for 2 months. The Syrian Democratic Forces (SDF), helped by the international coalition, are fighting for each single building facing fervent fighters of the Islamic state. SDF fighters reportedly have lost around 500 of their own, mainly killed by IS suicide bombers. Despite this, SDF are advancing, and now control nearly 40% of the city which has been completely encircled.

Further south, a tactical warfare took place between SDF and the Syrian army, a run to the southern shore of the Euphrates. The two armies met at Dalhah, south-east of Raqqah, where Arab tribes connected to the Syrian government agreed to create a buffer zone between the two sides.

The Syrian government, after having completely expelled IS from Aleppo governorate and regained full control of the Ithriya-Resafa road, now has the option of continuing along the southern shore of the Euphrates towards Deir ez-Zor (its armies are only 70 km away), avoiding Al-Bishri mountains in the south, reputed to be an Islamic State stronghold.

East of Palmyra, loyalist armies helped by Iran-funded militias pushed their advantage to Sukhnah, the last lock on the road to Deir ez-Zor.

Further south, in the vast Syrian desert, the loyalists, prevented by the United States’ aviation from going to the Tanf border post held by the Syrian rebels, led a flash offensive to reach the East Iraqi border, cutting the eastern route to the rebels. These rebels, now useless to the Americans because they can no longer fight against the EI, see their future in danger, especially since the loyalists have taken over all the localities of the East of Sweidaa, reducing the rebel presence in the south of the Syrian desert to a few mountain caves, refugee camps on the Jordan border, and Tanf and Zaqf bases.

In general, loyalists are pushing their advantage everywhere, helped by the reallocation of previously mobilized units on the fronts of Hama and Aleppo. Indeed, it should be noted that two out of the four de-escalation zones set up by Russia, Iran and Turkey, Idlib and Homs, have seen little confrontation between the rebels and the loyalists in the past two months. Heavy fighting occured in Idlib though, but between the two main rebel factions, Ahrar as-Sham and Hay’at Tahrir as-Sham (HTS), the latter clearly taking the lead, which will not facilitate future peace negotiations given their continuing ties with Al-Qaeda (HTS comes from the al-Nusra Front, former Al-Qaeda branch in Syria).

The end of the Syrian conflict seems to be drawing closer and we are moving towards a settlement of the conflict between a Syrian government in force supported by Russia and Iran, the mainly Kurdish SDF supported by the United States, and weakened and divided Syrian rebels, some backed by Turkey, others by Saudi Arabia. The attitude of the more extremist rebels (HTS in particular) will however be decisive in the conclusion of this conflict.