The Kurdish-controlled area of Nusaybin, a city of almost 100,000 in southeast Turkey is separated from the rest of the city by a ruined bridge, a rusting, shrapnel-marked petrol truck strewn across it.

Paving stones have been torn up to create countless barricades that proliferate amongst the winding streets.  Tunnels have been dug beneath the roads and holes made in walls to facilitate the movement of soldiers throughout the occupied neighborhood.

From Nusaybin, you can hear Russian jets flying sorties over Syria and see across the razor wire and guard posts that mark the Turkey/Syria border to al Qamishli, a city controlled completely by the Syrian Kurdish militia People’s Protection Units (YPG).  Between the Kurdish-controlled quarter of Nusaybin and the border, Turkish armored vehicles patrol the streets, their machine guns swiveling mechanically.  Next to them, old men drive wooden horse drawn carts selling vegetables.

The largely non-violent occupation of cities across majority-Kurdish areas in Turkey that began a year ago has become a war.  In Nusaybin, as well as other cities, the Kurds, who have struggled politically for equality and representation within the Turkish state for decades, are now engaged with the state in outright military conflict.  There is gunfire here every day as the Turkish army keeps military pressure on the guerrillas occupying neighborhoods in Nusaybin and on the largely Kurdish local civilian population as well.

A ceasefire between the Turkish state and Kurdish separatists broke down last July, reigniting a conflict that has killed more than 40,000 people over four decades. Influenced by the ongoing conflict in Syria, Kurdish success in Iraq and Syria, the breakdown of peace talks, and the suppression of Kurds in Turkey, Kurdish protestors and guerrilla soldiers began advocating, some peacefully, and others violently, for autonomy. 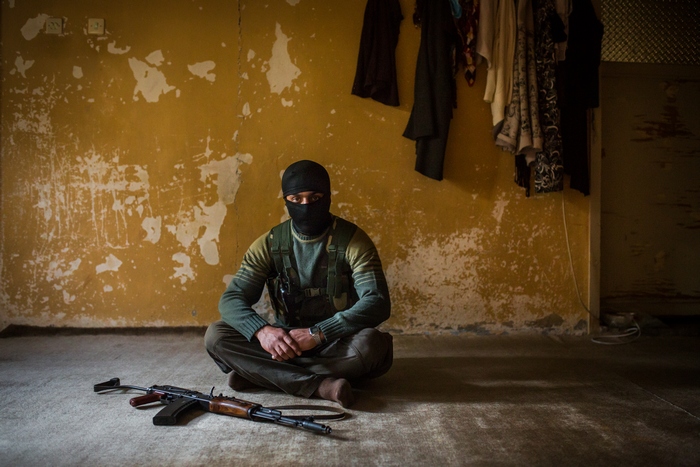 With a curfew declared in Nusaybin on the evening of March 13/14, the city is now at war. The YPS, or “Civil Defense Unit”, a militant Kurdish resistance group that is currently leading the armed conflict, evolved from the YDG-H (Patriotic Revolutionary Youth Movement), which spearheaded protests against the government last year.  Since the start of this most recent chapter of the ongoing conflict in July, the Turkish government claims that it has killed thousands of Kurdish fighters across southeast, though the number is more likely in the hundreds. Civilians have fled their homes en masse.

Though the connection between the YPS and the PKK, a militant Kurdish organization called a terrorist group by Turkey, the US and the EU, is disputed, it is likely that the YPS is supported by the PKK and takes members from its ranks; certainly, the YPS looks to the PKK for advice and inspiration. The walls throughout Nusaybin are tagged with these various acronyms of pro-Kurdish groups, the tentacles of a movement that crosses the borders of Turkey, Syria, Iraq, and Iran and spans four decades. 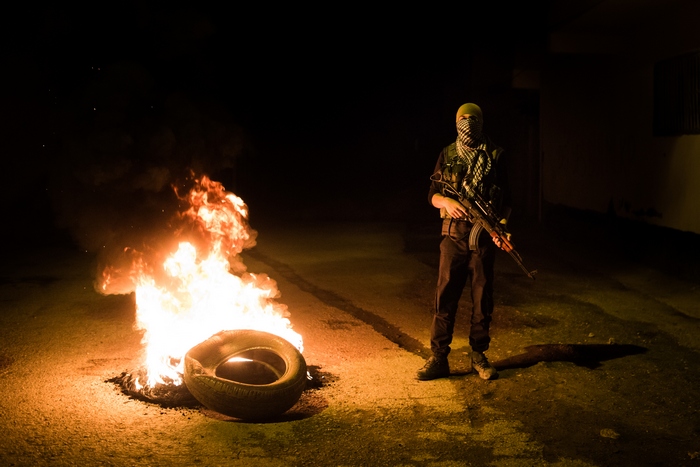 The history here plays an important role in encouraging the engagement of activists promoting autonomy for the Kurdish region of Turkey and the soldiers who are fighting for it.  Stories of past persecution and Kurdish families’ legacy of struggle with the Turkish government has, in some ways, defined the upbringing of many young Kurds involved in the movement now.

“My village was burned by the Turkish army in 1993”, said Zenda, a 27 year-old who joined the all-female armed wing of the YPS one month ago, but who has, for years, been affiliated with non-violent Kurdish movements. She joined the armed wing of the movement after her non-violent protest group was attacked by the Turkish army, but originally got involved in Kurdish activism due to the historical and family legacy she grew up with.  After her village was burned by the Turkish army, all her family and relatives from the village moved to western Turkish metropoles.  “I grew up in a big city in Turkey within the culture, but because of my background I was always interested in, and involved with, the [Kurdish] movement”, she said.

There are few Kurds who haven’t been at least tangentially touched by this decades-long conflict.  Moreover, there is a legacy of persecution that permeates the contemporary narrative of Turkish Kurds and has served as kindling for this armed conflict.

The history of the Kurdish/Turkish struggle though is only a fraction of a conflict that many activists and soldiers see extending well into the future.  “It’s a permanent struggle”, said a citizen in the Kurdish-controlled area of Nusaybin. “The history here is too long – it’s not going to end.”  But despite the persecution of the past and the prolonged nature of the conflict, the guerrillas who now carry guns in the street, the women and children who have helped to erect barricades throughout the town are not fighting for the autonomy of these villages just because of a historical legacy of prosecution – many have been victims of these injustices themselves. “We don’t have to talk about the history. Even today, what happened in Cizre [a nearby city], the Turkish State, Turkish Army burned many civilians alive, even this itself is a good reason to be here, to be a part of the movement, and to fight for the people here”, said Xebat a 22-year old soldier here.  But “mainly it’s about us being Kurdish people living in Turkey, but not being recognized by the state, not being allowed to learn [or study in]our mother language, not being allowed to practice our own culture and history, that’s why these people are united, that’s why these people are fighting against the Turkish state.” 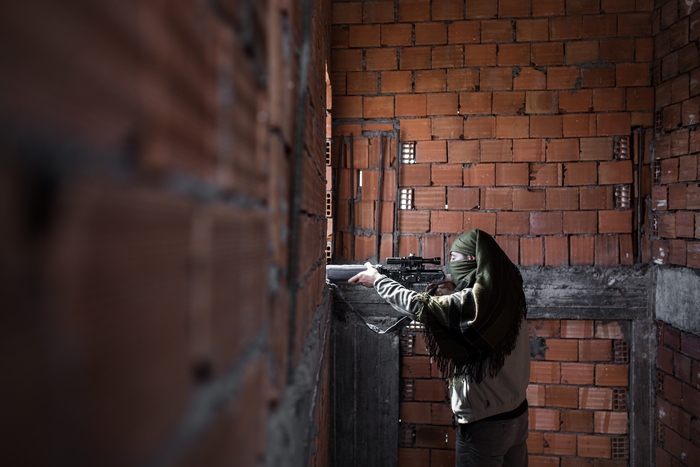 Throughout Nusaybin, local civilians have been affected by the war.“No one really goes out after sunset, because it’s too dangerous”, says Redur, a Kurdish civilian living in the town. “In the last 8 months, since the war started, it’s like this all the time and they’ve killed a lot of people [in Nusaybin]just because they’re walking around at night.”

Civilians have left the city in droves as the war here began in earnest. ‘Redur’, who had rented a small building where he wanted to open a café, has given up on his plans as civilians have fled the city – his family too, has left.  “My life has stopped since the war began”, he said.

In a recent report, Human Rights Watch claimed that “security forces repeatedly opened fire on anyone on the streets or who left their homes, failing to distinguish between people who were armed and those who weren’t and making no assessment of the threat an individual posed or the necessity of using lethal force.” Moreover, “when it comes to police and military operations against Kurdish armed groups, there are no limits – there is no law”.

Inside the Kurdish-controlled areas of the city, the civilian situation is dire – and bound to worsen since the imposition of the curfew.   Gunfire is regular and the children in Nusaybin don’t flinch when the bullets rush overhead.  Most no longer acknowledge the neither occasional crack of a sniper working nearby nor automatic rifle fire.  Some civilians have fled the city, but many others are trapped here, too poor or without the motivation to leave.

One woman living in a corner of the city in which heavy machine gunfire has pierced holes in brightly painted walls, lacks the money to leave, but is also unwilling to leave the guerrillas behind.  Unable to trade the milk and yoghurt she makes at a market that no longer exists and unable to sell her livestock for reasonable rates, she is trapped here: “If they [the Turkish army]kill me, they kill me.  If they come and capture me and ask me ‘why didn’t you move out, are you a terrorist?’ I’ll tell them, I’m just a poor woman.”  Even though she is stuck behind the barricades, sheltering from gunfire every night, “I would not leave here”, she says. “Because our sons and daughters are fighting here.”  Instead, she cooks and supports the soldiers.

The war has polarized civilians.  Some who are able and willing have fled; others have chosen to stay because they are too poor to leave or want to join or support the movement.  The ongoing war has possibly done more to radicalize local Kurds than it has to pacify them – “the youngsters who can take a gun and fight are already doing it now”, said Xebat.  The Kurdish militants here cite the violence of the state over the past year for radicalizing young men and women and encouraging these non-violent protests to become a war.  “In the last eight months, the Turkish state has been killing lots of civilians, lots of young kids, lots of old people, it doesn’t matter if they have guns or not – that’s what brings us here right now, specifically”, said Serfiraz, a soldier fighting in Nusaybin.  “The violence that Kurdish civilians have faced by the Turkish state since the war started is, of course, radicalizing all the young people, which means that many of the young people are joining these violent movements in these towns” across the areas of Turkey in which there is a large Kurdish majority, like Nusaybin. 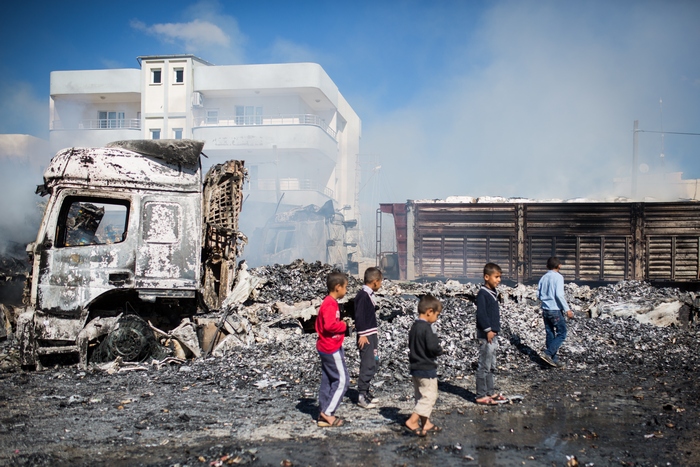 Just as civilians have been radicalized, so too have the fighters and the movement itself.  “TAK”, or the “Kurdistan Freedom Falcons”, a radical PKK splinter group, has taken responsibility for two recent bombings in Ankara that have killed dozens.  There is a risk that the PKK, the YPS, or other Kurdish militant groups working in Turkey could become more radical and more violent than they currently are.  The violence of the Turkish state, claimed Serfiraz, “is radicalizing the [militant pro-Kurdish]movement itself… They [the PKK]will not be able to stop the Kurdish young people in a humanistic way – if the Turkish state makes their violence stronger, we should all expect that there will be a lot more of these kind of radical and brutal events happening in Turkish metropoles, in the western part of Turkey as well.”  Violence from both sides seems likely to worsen before the conflict is resolved.

While their fight is, for now, against the Turkish state, local Kurdish militants also hope to create a new society autonomous from the Turkish government. “We are trying to create a society that doesn’t fit into today’s modern world, which would have problems to integrate because what we are talking about is against the system… So of course they will call us terrorists, but what we do here is offer a society to people where individuals can really be part of the management and everything”, said Serfiraz. “We are really talking about a radical democracy.”

Until the creation of an autonomous state, Kurdish militants fight from behind the barricades of occupied Nusaybin and other cities across the region.  “I was always scared of the [Turkish] state”, said Zenda.“But since the first time I took my position behind the barricades, I started to feel really free, without any suppression.”