Trending
You are at:Home»Focus»YEMEN – Saudi-Iranian Conflict in Yemen
By Salwa Dammaj on October, 2015 Focus, Yemen

The Saudi directed military intervention in Yemen has giventhe Saudi-Iranian conflict a special feature. As Saudi Arabia views its battle in Yemen as fateful for protecting its security and borders -particularly with the new US strategy in the region. The US response to its key ally in the region has remained stumbling or somewhat incomplete.

This is actually because of the new American strategy of withdrawal from the Middle-East, while staying in the Gulf, besides the agreement over the Iranian nuclear program.Moreover, the American endeavor to re-design its strategy to counter China as America’s top policy priority. Thereby Iran may be entitled to different roles including the US attempt to bring about balance between Iran and Saudi Arabia, so that Iran may be employed against China. 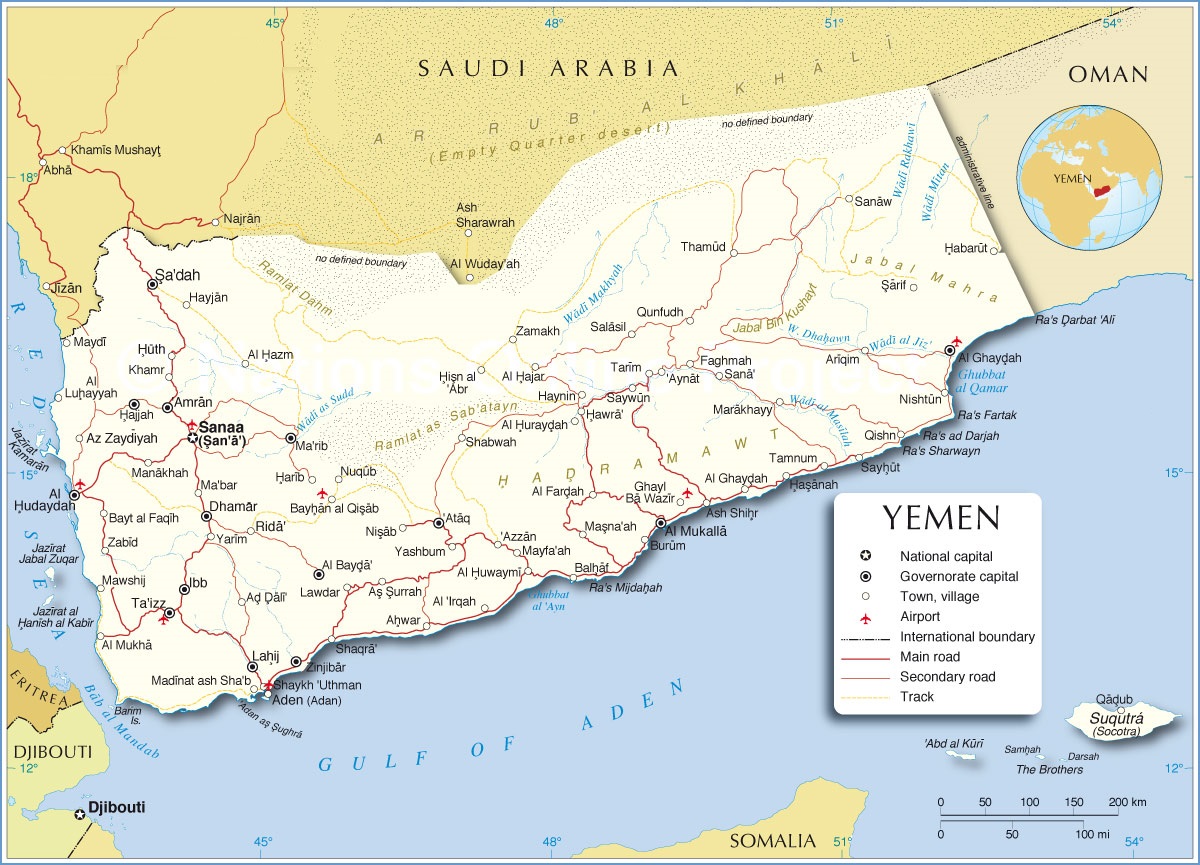 We have to begin with Iran’s mechanisms in Yemen. This is crucially important to understand how Iran began to enhance its influence in Yemen over recent decades.

The Iranian Islamic revolution deeply resonated among the Hashemite community in Yemen, particularly the political elite that ruled Yemen in the past. The Iranian revolution re-invigoratedHashemites’ hopes to regain their political authority. Large numbers of Yemeni politicians who belong to the Hashemite families were affiliated to the Muslims Brotherhood organization given that it has an Islamic blueprint. Iran’s Islamic revolution did not only provide an Islamic proposal but also a Shiite-oriented Islamic blueprint. Zaidism is considered to be a branch of Shia, very close to the Zaidi doctrine. By the end of the 1970s, a Zaidi reviving movement was created in the Sa’ada governorate by a number of Hashemite religious scholars and leading politicians. They went on to build their movement clandestinely until the Yemeni re-unification in 1990.

The Yemeni reunification coincided with endorsing a multi-party political system. The Zaidi movement immediately transformed into a political party named “Al-Haq Party”. Its high ranks were mainly of Hashemite origin. Yet it was a significant experiment and modern endeavor to engage the Zaidi trend within the political pluralism which the country had been introduced tosince the establishment of the Yemeni single state.

The Iranians have early on sought to establishing relations with the Zaidi-oriented political parties. They have already established direct linkages with the leaderships of the Al-Haq Party and the Popular Forces Union Party. In the aftermath of the 1994 civil war, the democratic margin was seriously decreased and the opposition political parties were beleaguered. The Al-Haq Party suffered internal divisions so that a fanatical faction broke away called itself “Believers Youth”.

The radicalgroup headed by HusseinBadr Al-Din Al-Houthi whose age and knowledge were not sufficient to qualify him to be a representative and reference of the Zaidi movement in Yemen. Intellectually, he was not qualified to assume such spiritual leadership. His lectures and pamphlets were small-minded, almost all based on the Shiite-Sunni dispute. He introduced himself to the Yemeni government to be capable to counter the Sunni-Sufi groups.

He also tried to replicate the Khomeini Iranian experiment in several aspects, for example the movement slogan: “Death to America! Death to Israel! Curse upon Jews! Victory for Islam!”. Most important is that he devoided the Zaidi doctrine of its Mu’atazilarational feature, giving the movement the Shiite Ja’fari characteristic instead. As a result, the Zaidism promoted by the Houthi movementhas become closer to the Iranian Shiite-Twelver than the Zaidi doctrine which emerged and developed in Yemen throughout more than 1200 years.

We can say that despite two Islamic doctrines existing in Yemen: Zaidi and Shafi’ai, the conventional sectarianism did not have significant influence in practice until the emergence of the Houthi movement. The Houthism within the Yemeni Zaidism may be viewed as quite similar to the movement of which Al-Qaeda stemmed out of the Muslim Brotherhood.

With the beginning of Sa’ada’s wars from 2004 through 2009, the Houthi movement has largely been associatedto Iran. The Hezbollah experiment in Lebanon seems to be replicated by the “Houthis Ansar Allah” in Yemen. There has been a direct line between the Houthis and Tehran where Beirut served as stopping post, receiving hundreds of Yemeni young men who got free-visa entry to Tehran by Hezbollah and Iran’s intelligence systems in Lebanon. The Houthis operatives and media men were trained by Hezbollah, which along with the Iranians helped to establishthe Houthi media machinery.

During the period 2004-2015 Iran has been bolstering its presence and mechanisms in Yemen. Meanwhile Saudi Arabia appeared to be fed up of its allies including tribal sheikhs and political parties. Saudi Arabia, along with other Gulf Cooperation Council (GCC) member states, viewed the Muslim Brotherhoodsto be a threat to the Gulf’s regimes. Ironically, while Iran with its influence and allies in Yemen has been inthe best position, Saudi Arabia found itself to have lost significant leverage power and influential elements. The Saudis have come to realize how alarmingit is to see Iran’s allies in control in Yemen.

Though Saudi Arabia acted jointly with the GCC member states to help Yemen avoid civil war during the 2011 popular uprising. The Saudi leadership strongly supported the GCC-brokered deal and pressed effectively to maintain the ex-president Saleh’s regime; they might believe that was the right thing to do.Yet Saudi Arabia and the Gulf states were shocked by the Houthi takeover on September 21st,2014.

Surprisingly, the Houthis, Saleh and Iran have proved to be allies. It was an alarming moment for the Saudis who should have discovered their intelligence deficiency and ineffective diplomatic devices. Particularly, the Iranian administration, for Iranian policy reasons, was reported to have spoken openly about Iran’s support to the Houthis. The senior Iranian officials’ statements boasted Iran’s control over the Gulf region and its influence stretching to Bab al-Mandab, on the south-western-most tip of Yemen.

Indeed, the US, EU and even Saudi Arabia turned a blind eye on the Houthi emergence. It was a big mistake.They thought wrongly that they could employ the Houthis militants to fight terrorism. The Houthis did make a small favor to theAmericans and Saudi Arabia by combating their rival radical groups in Sa’ada and Sana’a including the closure of religious institutes in Damajin Sa’ada and Al-Iman University in Sana’a. But they have caused the Saudis to pay a high price.

Once the Houthis took over the capital Sana’a, the Saudis started to prepare for the war in Yemen. The new leadership headed by King Salman has made significant changes and demonstrated determination to make serious decisions.

After the Houthis had taken over Sana’a, Iran substantially increased its support to the Houthis, particularly with weapons. A direct air flight initiated from Tehran to Sana’a and Sa’ada airport. Besides that, the Houthis have seized the heavy weapons and military equipments of the government army. This actually has been unbearable for the Saudis.

Since the onset of the war on March 26th, 2015, it has been quite clear that the Saudi-led coalitionhas achieved part of its overall objectives in Yemen. Saudi Arabia has already managed to cut the nails of the Houthi movement. It has finally managed to bring the legitimate Yemeni government back to the city of Aden. The coalition could also drive the Houthi-Saleh fighters out of the southern regions. Recently more progress has been realized in securing the Bab Al-Mandab strait, the strategically significant marine passageway for the Arabian Gulf oil to Europe and America. Moreover, the government troops backed by the coalition air strikes could make remarkable progress on the Marib front, which is vitally important to defend Sana’a.

This has made Iran almost unable to politically act effectively to help its allies or provide them with the needed sophisticated weapons as the coalition could effectively impose a tight air, marine and land siege. Iran find itself in a situation in which it can only help with intelligence.

In spite of the significant progress realized, militarily and politically, the end of the war in Yemen does not seem to be coming soon. One of the significant reasons for this is that Saudi Arabia has lost the loyalty of many tribes in the northern regions, upon which the Saudi leadership used to depend on for more than fifty years. This may be an indicator signaling a battle lingering on in the north region, in particular.

A prolonged war is set to give rise to the emergence of a key player in the conflict: Al-Qaeda, which has already been in existence as it has controlled large swaths of the Hudramout governorate. Consequentially, the Saudi-Iran conflict may be broken by an emergent third player.

Unfortunately, the sectarian orientation of the Houthi-movement has largely helped Al-Qaeda to flourish and make its argument appeal to a large portion of the Yemeni population.