Trending
You are at:Home»Yemen»YEMEN – Treasures and Heritage Seriously Affected
By Abdulsalam Al-Qarari on August, 2016 Yemen

Yemen’s greatest palace, known as Ghumdan, had been demolished capriciously by Y’a’la bin Umaih in the 7th B.C. century. Ya’ala, a person from the Qraish tribe of Mecca, had served as a governor of Yemen for 20 years in the first half Hegira calendar. During the reign of Othman bin Affan, the third Caliph – the ruler of Muslims – Ya’la asked Othman a mandate to demolish the Palace of Ghumdan. The later immediately issued a decree authorizing the manic governor to demolish one of Yemen’s most precious treasures. His argument was that Yemenis were extremely proud of their great history and ancient civilization that Ghumdan used to be a reminder and symbol of Yemenis’ greatness and ingenuity.

In 199 of Hegira, a very famous and significant Yemeni dam had been demolished by a frantic racial person named Ibrahim bin Mohammed, Yemenis labeled him as a butcher for the atrocities he committed. History books informed us that Ibrahim was one of Imam Ali bin Abi Talib’s grandsons. He had lead a military campaign from Iraq to Yemen. When he arrived in Sa’ada, he demolished a very big and historical dam, known as “Al-Khaniq Dam”.

Under the Imamate dynasties ruling, Yemen’s ancient history had been systematically targeted. A great deal of Yemeni antiquities were destroyed and wiped out. Once Salafi Wahibists emerged in the 19th century in the land of Hijjaz and Najd, they dispatched their frantic militants to destroy large number of ancient tombs and shrines in several Yemeni cities and towns.

Throughout the reign of former president Ali Saleh, the smuggling business flourished more than ever. Hundreds of Yemeni monuments, inscriptions, manuscripts and old books disappeared from the country. The largest amount of these treasures were acquired by the Al-Saud royal family who are very keen on purchasing Yemeni monuments and manuscripts not to maintain them in museums or to sell them later, but to make sure that they will disappear forever.

Yemen’s historical and national memory has been seriously damaged by the ongoing warfare. All warring factions have been blamed for intentionally targeting archeological and historical sites. However, the largest portion of destruction reported to have been caused by the aerial strikes by the Saudi-led coalition’s warplanes.

Old and ancient cities, archaeological and historical sites, residential and worship buildings, monuments, museums and citadels have not been spared. The historic value and memories enshrined in these sites have been irreparably damaged or destroyed.

The Old City of Sana’a and the historic centre of Saa’da were hit by shelling and gravely damaged.

Many other sites, some of which figure on Yemen’s World Heritage tentative list, have equally suffered damage, including the archaeological site of the pre-Islamic walled city of Baraqish, the archaeological sites of Marib from the end of the 2nd millennium B.C., and the Great Dam of Marib, a marvel of Yemeni technical engineering.

Additionally, there are several historical sites including castles, mosques and ancient tombs that have suffered serious damages. The Citadel of Taiz, one of the most significant historical sites in the city of Taiz, known as “Qalat Al-Qahira”, erected some 700 years ago, is severely damaged.

The Sirah fort, dating back to the 10th century, overlooking the city of Crater and the Indian Ocean has also come under attack.

Movable heritage has also suffered severe losses, as in the case of the Dhamar Museum, which used to host a collection of 12,500 artifacts, and which was completely destroyed in May 2015.

The National Museum of Taiz also has come under attacks repeatedly, seriously damaged and dozens of ancient manuscripts and historic documents were burned.

The UNESCO Representative in the Arab States and Yemen, Anna Paolioni, described the situation for Yemeni heritage as similar to that of Iraq and Syria.

The World Heritage Committee inscribed, on 2nd July 2015, two sites in Yemen on the list of World Heritage in danger: the Old City of Sana’a and the Old Walled City of Shibam. The Committee voiced concern over the damage inflicted to an Islamic city of great historic and heritage importance. Situated in a mountain valley at an altitude of 2,200m, Sana’a has been inhabited for more than 2,500 years. In the 7th and 8th centuries the city became a major centre for the propagation of Islam. Its religious and political heritage can be seen in 103 mosques, 14 hammams and over 6,000 houses, all built before the 11th century. Sana’a’s many-storeyed tower-houses built of rammed earth add to the beauty of the site, inscribed on the World Heritage List in 1986.

The Committee also decided that the Old Walled City of Shibam was under potential threat from the armed conflict, which compounds safeguarding and management problems already observed at the site. The Committee therefore decided that also placing it on the list of World Heritage in danger could help reinforce international mobilization for the safeguarding of the site.

Surrounded by a fortified wall, the 16th-century city of Shibam is one of the oldest and best examples of urban planning based on the principle of vertical construction. Its impressive tower-like structures rise up from a cliff and have given the city the nickname of ‘the Manhattan of the desert’. It was inscribed on the World Heritage List in 1982. 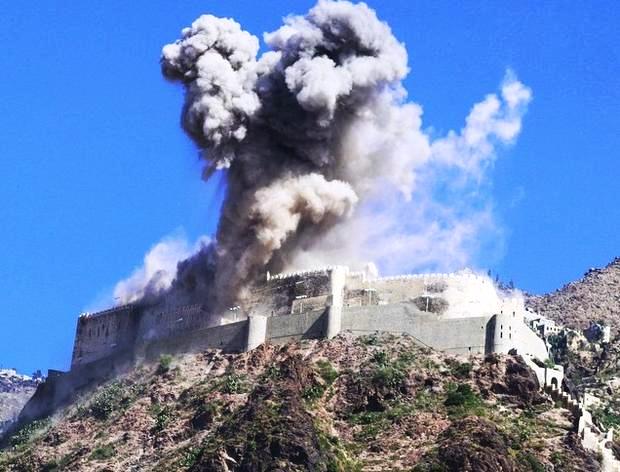 The UNESCO announced on July 16, 2015 an Emergency Action Plan for the Safeguarding of Yemen’s Cultural Heritage upon the conclusion of a two-day expert meeting held at UNESCO. The plan responds to the continued threat the ongoing conflict poses to the country’s tangible and intangible cultural heritage.

The Action Plan, developed by UNESCO, its institutional partners and relevant Yemeni national institutions, aims to respond to the recent widespread destruction of important heritage sites and museums caused by the conflict, as well as to the disruption of intangible heritage expressions, which together constitute the symbols of peoples’ identities and a fundamental asset for the country’s recovery and sustainable development.

The Plan addresses three main areas of work, including awareness-raising and advocacy; information gathering and coordination; as well as technical assistance through risk-mitigation measures on the ground and capacity building initiatives.

Participants in the meeting included experts in built heritage, archaeology, intangible cultural heritage, handicrafts, museums and archives, as well as representatives of key institutions involved in cultural heritage protection and the fight against the illicit trafficking of cultural property, such as INTERPOL, the World Customs Organization, IFLA, ICOM, ICOMOS, ICCROM and ICA.

Yemenis are torn with disbelief as they watch the country’s antiquities crumble. Yemen’s Cultural relics and historic treasures have been destroyed or sold for quick cash. The ongoing conflict has caused Yemeni people unaffordable costs; erasing their history, leaving them with an uncertain future.

The Director General of UNESCO described Yemenis’ plight accurately saying: “It is evident that the destruction of their culture directly affects the identity, dignity and future of the Yemeni people, and moreover their ability to believe in the future”, said Irana Bokova, and she is perfectly right.

At the beginning of the Saudi-led military campaign, Mr Al-Yazili told me “Al-Saud have got the chance they were looking for, they would eliminate everything of the remaining signs of Yemen’s ancient history.” Just a week after his anticipation, the Al-Qahira Castle in Taiz was targeted by an aerial strike. Personally, I am afraid that King Salman may decide to follow suite to Othman and keep his military campaign active in Yemen…

So that what remains of Yemen’s history shall be totally eradicated.