Immigration seems innocuous when it is considered beside international human rights laws. However, the world doesn’t always respond predictably to external authorities. 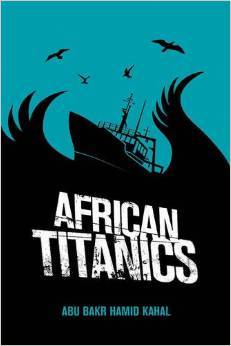 In his masterpiece African Titanics, the renowned Eritrean novelist Abu Bakr Hamid Kahal explores the world of illegal migrants and their risky attempts to reach Europe. Too often human traffickers prey upon them, offering passage on unstable, overcrowded boats. Looters and others with unscrupulous agendas also target the refugees, who offer no resistance as they lose their battle to escape death.

The long journey from sub-Saharan states to places characterized as safety havens is uncertain and treacherous, crossing other states, borders, deserts and seas. The novel reflects the way unlucky refugees are confronted by good and evil, as well as by existential questions with few answers. The imagined journey is examined through various perspectives. It focuses on uncovering the truth about what persuades people to risk everything for such an uncertain future.

In examining the motives of the immigrants, the novel explores their world views and conflicting beliefs amidst the danger, fear, hunger and thirst. The narrative transports the reader into the gritty day-to-day events of illegal immigration. While the novelist is clearly capable of directing the narrative in any number of directions, he sticks to a central theme that gives his work equilibrium. Still, the theme of the narrative paves the way for questions that are impossible to answer.

Likewise, the variety of the natures of established characters is as vast as the deserts they adventurously crossed.

Since its 2008 publication in Arabic, African Titanics has become much more than an African novel telling a story of illegal immigrants and their broken dreams.

Translated into many languages worldwide, African Titanics has elevated to an international level the dialogue about displaced immigrants in a way that tugs at the conscience.

It can’t be safely considered as just a protest or political statement against a prejudiced world.

It is a world view, a weltanschauung.